Although only in it’s second year, the WeAreDevelopers conference has become a central hub in Vienna’s web and app developer community. Just like the year before, the 2016 conference that took place on the 13th April at the Austrian Economic Chamber (WKO) was a good mix of keynotes, expert round table sessions and lightning talks. The organizers even managed to fly in Peter Sunde (co-founder of The Pirate Bay and Flattr) as the main keynote speaker. And his talk was a highlight for sure, you can read more about it later on in the article. We want to give an overview about what happened at #WAD16 – the highlights, trends and general vibe among Austrias software developers.

Kicking it off – collaboration, concepts and culture

The first talk from GitHub was about how GitHub uses GitHub internally to collaborate. Well to cut the long story short, they are using Markdown in combination their own service for most of their internal collaboration, even within „non-developer“ departments like sales or marketing. Why not?

Andreas de Pretis, CEO of 25th-floor, talked about the concept of Mob Programming. This concept is kind of a further development of Pair Programming, where a group of people is basically coding together in front of one computer screen. It certainly requires a new way of thinking but also integrates established concepts like cross-functional teams, agile practices and Extreme Programming (XP). Check out mobprogramming.org if you want to know more about it.

Christian Rauscher of rubicon raised the question whether we need Software Craftmanship? His thoughts are based on the Manifesto for Software Craftmanship that somehow extends the better-known Agile Manifesto. Software craftmanship is based on three values: Passion, quality and (continuous) learning. We can definitely support this idea as these are also values we live at our company creative workline GmbH. Software development is not just about tools and patterns, it’s also about a certain culture that exists within organizations and communities.

The highlight of the conference was definitely the keynote of Peter Sunde Kolmisoppi. The IT expert and self proclaimed activist, artist and prankster gave some very interesting insights on his two undertakings The Pirate Bay (TPB) and Flattr. His involvement in TPB brought him six months in jail and 10 millions of debt in his home country Sweden, whereby the latter doesn’t seem to bother him too much because he just won’t return there. Basically what he’s doing with all his actions is holding a mirror up to society. 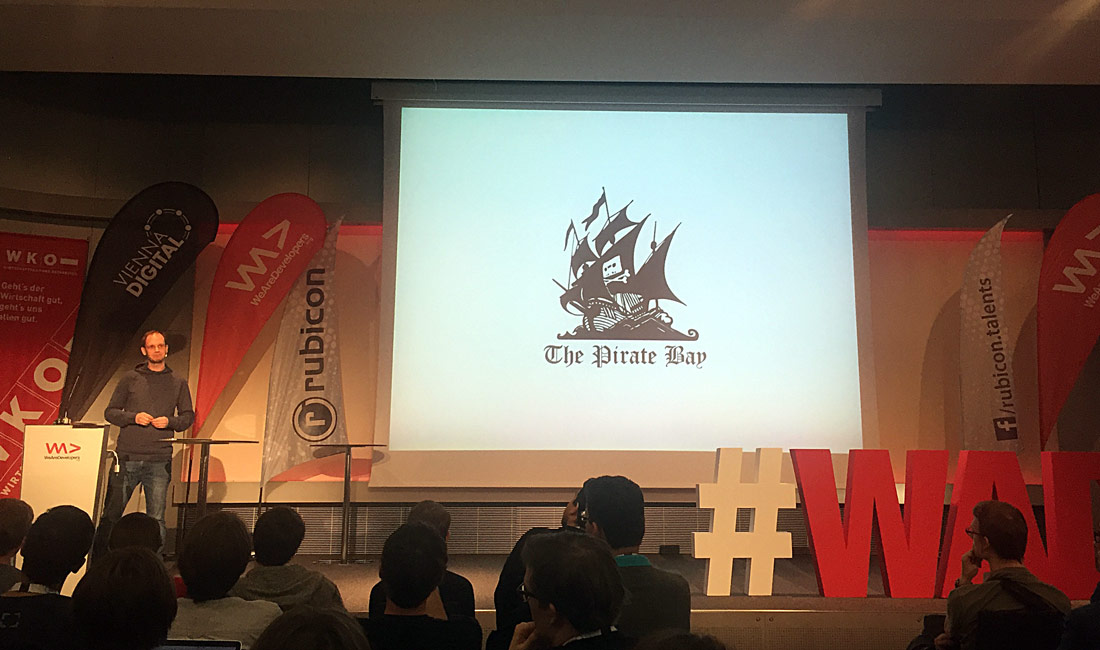 Like some kind of modern Robin Hood who uses information technology instead of bow and arrow he tries to rise up against the establishment, combining IT and art in a smart and sometimes childish way. You might not agree with everything he does but it’s people like him that think a step further and stand out of the crowd by not accepting the status quo. He called upon developers that they should use their skills to shape the future in a good way and fight for net neutrality and an open Internet.

A focus on web and app development

Two talks from Accenture and REWE International AG focused on the architecture of large systems. Another focus of the conference definitely was how to build modern web applications. One talk was about „Securing Single Page Applications with Token Based Authentication“ (JWT), another one about how karriere.at is building their loosely coupled front-end based on BEM, ES6 and Webpack. Topics like React and Redux for the frontend as well as node.js for the backend proved that JavaScript has become the most widely used programming language, at least for web-apps. One interesting side note was that Torsten Stüber, Co-Founder & CTO at Ohlala, said that they want to move away from CouchDB because it’s not scalable enough, towards a relational database system or MongoDB.

„Why User Centered Design?“ and „Dev and Marketing – A Misunderstood Love Story“ were two talks that should motivate developers to look beyond their own nose and how their work can be even more valuable if they take into account UI/UX design and marketing.

Getting more into the direction of (native) mobile app development, there were only few topcis about this. Peter Steinberger, CEO & Founder of PSPDFKit, presented their cross platform strategy for iOS and Android. Their mobile PDF framework is based on C++ which allows them to use one common code base for both platforms. Daniel Albertini, CTO & Co-Founder of Anyline in Vienna, presented their very similar approach for boxing text recognition into a cross-platform SDK.

Altogether the WeAreDevelopers 2016 conference was really informative as well as entertaining, not to forget a great way to network and connect with others from Austria’s developer community. Even some speakers noticed that it’s rather a „hiring conference“ than a developer conference. That’s true in a sense that most corporate sponsors used the platform to try to attract talented developers to work for them. The organizers of the conference partnered with local meetup groups like AndroidHeads Vienna, AngularJS Vienna and Vienna ReactJS to bring together the the developer scene in Austria’s capital. We at creative workline GmbH Wien are proud to be part of this community and will take away lots of new ideas, information and knowledge that we can use in app projects for our customers.

We are definitely looking forward to next year’s WeAreDevelopers conference! Some other reviews can be found here, here and here. If you were there as well, how did you like it?